home improvement #2 and a ride with the goons

big weekend at the house... lots of painting done and even more prepped for. it still seems like we've got a really long way to go though. the floor guys come in tomorrow to start work refinishing the floors upstairs and the stairs. the hardwood on the first floor will have to wait until we figure out what's happening to the kitchen, and get that work done. no riding this weekend, but it was worth it for the work we got done. there's still a lot to get done pre move in (and even more after we're in) but i'm starting to see the light at the end of the tunnel.

we did hit the waba gala and auction on saturday night and had both had a good time there. we picked up a couple of things for the walls of the new house and a vintage schwinn racer for cruising around town.

monday night i hit my first snafu... when we finished with the living room paint we decided to put up all of the new switch and outlet covers. the only light switch in the living room was an older one with 2 switches in a single box. the problem is, no one makes switchplates that fit this switch layout. we've got a couple of these, where the switch has been changed out one that still has the same layout (2 switches, stacked vertically, in a single box) but the surrounds on the switch are the same size as a standard outlet, so a normal double outlet cover will work. i figured that swapping out thw switch for a new one would be a simple task... not so. this house has some funky wiring, or these new switches are doing something that i don't want them to.

caught up with the goon ride tonight, hung on well on the way down beach drive until i flatted by military road. managed to get the flat fixed in time to catch back up with the ride as they came down off ross drive and started heading back out into maryland. good hard ride, but i'm not sure how it'd have gone if i hadn't flatted and would have tried to follow them up ross drive.
Posted by joe at 12:43 AM 1 comment:

the last few days have been so busy that i haven't had time for blogging. if i'm not at work or riding, then i'm at the new house (yes, we settled on friday, photos up on flickr) where we don't have internet access yet. we've barely been in our apartment since friday except to sleep. so far we've pulled up the carpet in the office & stairs, painted one of the upstairs bedrooms (now heather's craft room), and started preping the living room, hallways, office, and guestroom for paint.

we've had some asbestos removed from the basement and the ducts cleaned and now we're getting quotes on refinishing the hardwood floors upstairs (the downstairs is going to wait for some work on the kitchen) and waiting for drawings of (and a quote on) our new kitchen. the ideas all seem so good when you don't have to pay for them... lets hope they still look good when we figure out what they'll cost.

sunday i entered my first road race -- the finale of the tradezone training crit series... can't say it was all that fun. i worked pretty hard, took some turns at the front, a random flyer about 1/2 way into the race that lasted all of a half lap, and took a try at the 2nd preme (ended up 4th there) and finished in the pack. we rode to and from the race from klasmeiers, so it ended up being a 60-mile, 4-hour day on the road bike.
Posted by joe at 9:53 AM 1 comment: sorry coach, i bailed on tonight's workout... the weather was so nice today that heather wanted to head out for a ride, so we took a spin into rock creek park and then stopped by red dog cafe for dinner on the way home. time well spent on a beautiful spring evening with a beautiful riding partner. call it a recovery ride ;)
Posted by joe at 7:28 PM No comments:

before the car trouble started we actually had a pretty nice weekend going... after hanging out at the dcist exposed opening for a little while on friday we went back home and i packed up the car for saturday's outing to harrisonburg for a morning ride and the gw national forest public comment meeting at jmu.

we'd set the coffeemaker on auto so that i'd have coffee when i got up, but didn't realize the clock was set wrong. luckily i noticed the lack of coffee brewing noises & smells when i got up and i got the machine going just in time to fill my cup before i had to be out the door to pick up matt. wolf gap is a good 2 hour drive from dc, but we made it there with time to spare and soon were out riding in the GW along with chris scott, junkins, mike, susan, paul, and pat.

the downhill was a lot of fun... one of the more challenging that i've ridden, with more than a few 'oh-sh*&t, get off the front brake, get back and hope' moments and one crash near the end. the epic was a little out-gunned on that downhill... i'd have rather had another inch of travel and slacker angles. at the bottom of the downhill we hit a fireroad and took that back to the road and climbed back up to the cars.

after the ride we raced down to harrisonburg for the public meeting about the george washington national forest master plan. it looks like the mountain bike community was pretty well represented: there were 3 of us in the breakout group that i was assigned to and i got reports of similar numbers in the other groups. our group was really civil (we had hear reports of some more heated exchanges at meetings earlier in the week) and everyone made their comments. everyone had their own agenda, but also seemed open to keeping the forest open for multi-use and working together... haven't been blogging about many rides recently, because they've mostly been long road slogs that aren't that interesting or inside on the trainer (is that really even a "ride"). had a good weekend though, with 2 long back to back road rides.

saturday the weather was nice and i hit the roads with scardaville, tom, marc gwadz, and welp. i was pushing the pace with welp for the first 1/2 of the ride but on the way back in i was just managing to hang on behind marc who kept the tempo high all the way back into the city.

sunday was colder and windier and matt & i spent the day battling the winds. with a tailwind it felt like you were hardly working, but once you turned anywhere near northwest you were heading right into them and straining just to keep moving.

since eating well is an important part of trainin, after sunday's ride i cracked open a new cookbook - charlie palmers's practical guide to the new american kitchen and took a crack at some proscuitto crusted chicken (with baked parmesan polenta & chili spiced broccoli rabe). so far the cookbook seems like it's really good - each recipe is presented as part of a full meal along with wine and dessert suggestions, and the recipes are simple, yet sophisticated. the results of this first try were really good. maybe it was all the butter?
Posted by joe at 9:26 AM 1 comment: 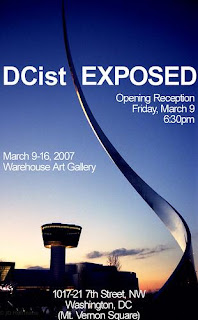 yo, i'm going to have a picture in the DCist Exposed show at the Warehouse. The show runs march 9th - 16th with an opening reception on the 9th (friday) at 6:30pm. here's the press release:

Washington, DC -- DCist.com is pleased to announce our first ever DCist Exposed Photography Show at the Warehouse Arts Complex from March 9 -16, 2007. More than 35 local photographers, both amateur and professional, were chosen out of over 200 who submitted their work for the show through the DCist Flickr site. Every day DCist.com selects photos from this user-generated photo pool to use in its daily coverage of local news, arts and entertainment, politics, food and sports.

The exhibit will showcase new talent as they reveal the city to us through the eyes of people who live and work in the D.C. metro area. In a city too often seen purely as a collection of federal government buildings or a destination for tourists, these photographers capture the local music, art, architecture, and urban surroundings that give Washington, D.C. its unique cultural vibrancy.

Find links to all photos accepted to DCist Exposed here:

DCist.com is a website about the Washington, D.C. area and everything that happens there. We've been mentioned in The Washington Post, The New York Sun, the Current Newspapers, Salon.com, and Washingtonian magazine, which said that DCist was a "habit-forming" blog that specializes in the collection of "tidbits of political and cultural arcana." just back from a loooong ski weekend in jackson hole. i'd meant to upload pics & blog from there but the skiing was so good we ended up collapsing pretty early every night. we had a couple days of skiing and spent a day and a bit nosing around the town. the snow was good when we got there and just kept falling. monday was the epic day of the trip... almost a foot of new light snow overnight left everything pillowy soft. since heather took lessons the first two days, i ended up doing the same and it turned out to be a really good idea as the instructors (especially on monday) took us to parts of the mountain that i'd never have tried or never have found: tensleep bowl, bernie's bowl, riverton bowl, thunder liftline, the cirque, moran woods, bivouac, and on and on and on... on monday it seemed more like the 3 of us in out group had a private guide to all the good powder stashes. on top of that i finally feel like i'm getting a handle on deep snow, bumps, steeps, and trees. on our last day heather and i finally got a chance to ski together and i got to see how much progress she made. it was pretty unbeliveable, but jackson hole forces you to up your game. after having trouble on east coast blues last year she was able to make it down just about any jackson hole blue, and even tried a double blue. beer notes: the fat tire at the mangy moose didn't taste as good as i remembered. maybe it was an old keg or dirty lines, or maybe my tastes have just moved on a bit. on the other hand, moose drool was really good and we brought back a case of it. had some good (and local) snake river brews and the hazed & infused from boulder beer was good as well.